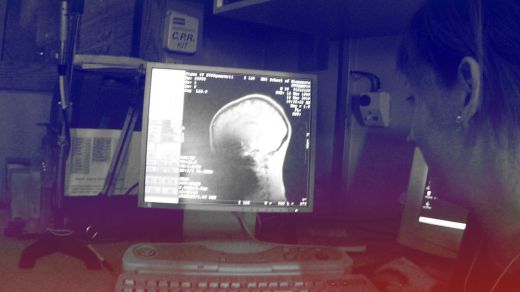 Anyone can use a search engine like Google to locate the nearest seafood restaurant, or the best school in their neighborhood. But medical researchers don’t have an easy way to type in questions and receive meaningful answers.

Andy Conrad, who heads up Verily—formerly known as Google Life Sciences—is working with a coalition of academic hospitals, physicians, universities, and patient advocates to bring medical information into one place. He calls it the “Google of human systems biology.”

“Unfortunately, most of the information that scientists use isn’t easily available,” Conrad said on stage at the Future of Genomic Medicine conference in San Diego on Thursday. “That information sits around in difficult-to-crack domains.”

Conrad didn’t provide many specific details on how the product would work. But he did say that it would involve a library of sorts that leverages machine-learning technology. “It doesn’t work as wonderfully as a human,” he says. “But it can answer questions.”

He confirmed a rumor that Verily’s team is working out of a 500,000-square-foot campus in South San Francisco, just a stone’s throw from Alphabet’s corporate headquarters. The size of the workforce remains unknown, but Conrad said he is adding 1,000 people in the coming months.

MEDICINE IS AN ART AND A SCIENCE

Indexing the world’s medical information isn’t a particularly new idea. IBM Watson and other tech behemoths are developing artificial intelligence technologies to do just that.

But Conrad, who previously worked at Google’s research and development lab Google X, implied that Verily is taking a more human-centered approach. Medicine is as much an art as a science, so Verily is working with patient advocates, mothers, and doctors to determine how to aggregate data that can’t be found in scientific journals.

As an example, Conrad said he recently spoke with a high-profile doctor who used loosely veiled code like “TLS” (‘they look sick’) to describe his patients. These notes might mean a lot to an individual doctor, but they mean very little to anyone else. “How would you capture that in an algorithm?”

This isn’t Google’s first foray into health care. The ill-fated Google Health shut down in 2011 after it failed to gain traction with consumers.

But Conrad said he has learned from previous failures. “In our early forays into health care, we had a bunch of engineers that might not be wonderfully in touch with the rest of the world, especially at Google,” he recalled. “But the most interesting thing we did then was to gut an office and turn it into this sequencing lab filled with physicists.”

Going forward, Conrad suggested that Verily will explore how to incorporate data from devices, like smartphones, into its database. These tiny devices that we carry around in our pockets contain a wealth of health information beyond step counts. Conrad pointed to the potential of using smartphones to determine if a person is depressed.

“People often ask me about the future of medicine,” he said. “We think the most important tool is the computer.”